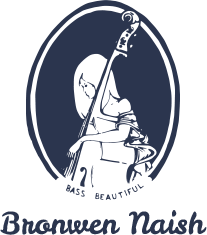 It’s not all about money

Whilst it might have been seen as a conceit on my part to call myself ‘The Only Woman Double Bass Soloist in the World’, at that time, it was the exact truth. It didn’t make me, nor did I claim to be, the finest player and in no way did it present a challenge to any other bassist. I was just lucky to be able to use the moniker. It must have given me a certain cachet in scarcity which could have influenced the fee levels I was able to charge. No, I don’t think that’s right…getting any fee was always a challenge.

But I was fortunate to be in a profession which, to my knowledge, never paid women players less than men for doing the same job. Granted, it was next to impossible for women to actually win a position in a professional orchestra, but at least if they did, they were equally remunerated. I remember as a student in the fifties being paid the princely sum of £5, guys and girls, for playing in scratch orchestras for the numerous amateur Musical Societies in their annual offerings of ‘The Desert Song’ or similar. (a good quality room at the time, rented for £3.50 a week)

I remember very clearly, the one and only musicians’ strike in Britain when all musicians downed instruments in protest against the increasing use of recordings by the BBC, which was, at the same time, cutting back on live performances. The spectre of live musicians being squeezed out of existence and the world then having to rely upon recorded music forever and ever was a real prospect.

It seems extraordinary to think of such a scenario being a genuine possibility, but the balance which we have today is entirely the result of that stand-off which was only solved when the BBC agreed to the principle of ‘needle time’. That dates it, of course, but the compromise was that there must be a strict rationing of time allocated to playing recordings with comparable time given to live performance, including special regard for new music.

Out of this new recognition and respect for live musicians as opposed to recorded ones grew the demand and need for a dedicated radio channel for music, first manifesting as the ‘Third Programme’ and then becoming our current Radio 3.

If there is one aspect in my growing up life that I could change as I tried to be some sort of musician in a somewhat musically barren household, it would have been to have had Radio 3 available to me. As it was, I had to make do with light music in all its formats ,including ‘Workers’ Playtime’, ‘Semprini Serenade’, ‘Friday Night is Music Night’, concerts by the BBC Concert Orchestra and my favourite ‘Palm Court at the Grand Hotel’ with Max Jaffa wielding his extraordinary violinistic skills. I hardly heard a symphony or overture until I arrived at Grammar School and although I made up quite a lot of lost time when I arrived in Manchester, I do envy, in retrospect, the listening resources available to today’s young start-up players…..